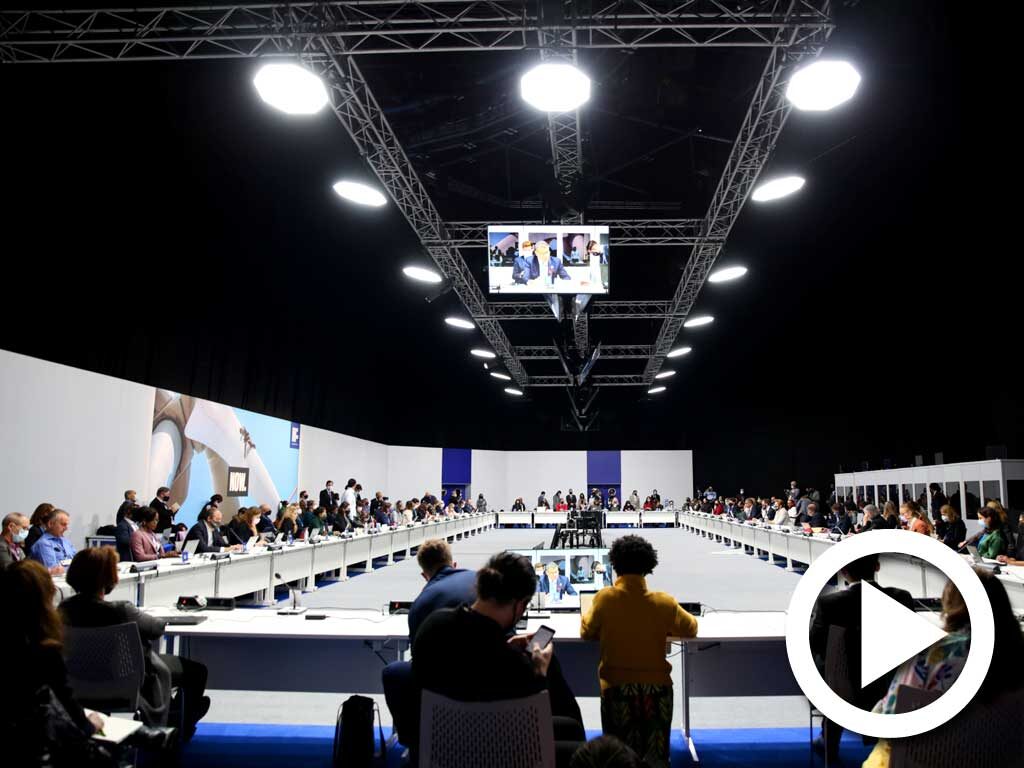 The Net Zero Carbon Events pledge from the Joint Meetings Industry Council, which presents The Iceberg, has just been delivered at COP26. At the 60th Congress of our partner ICCA (International Congress and Convention Association), The Iceberg spoke to Aileen Crawford of the Glasgow Convention Bureau and to Guy Bigwood of the Global Destination Sustainability Movement.

Speaking in Paris at the 60th ICCA Congress, Aileen Crawford, Head of Tourism and Conventions at Glasgow Convention Bureau, talked of COP26 being her destination’s “moment on the international stage”. Conference legacy, the Iceberg ambassador said, is always embedded into the strategy of Glasgow’s CVB. But with the impact of COP26 “we are talking about the legacy for humanity, and for humanity’s place on our planet”.

Crawford described how COP6’s venue, the SEC Centre, also had a voice in the creation of that legacy. That JMIC been given the chance to make its Net Zero Carbon Events industry pledge at COP, she said, “shows how important in person events are to decision-making”. Quoting from a VisitScotland campaign she added “We meet today to change tomorrow. And COP26 is an amazing opportunity for the industry to step in, to lean in, and be part of that.”.

At the 60th ICCA Congress, the Global Destination Sustainability Movement announced its GDS-Index annual rankings. Glasgow rated fourth among the benchmarking destinations, and Crawford described this as part of the city’s transition from “steam to green”. She also discussed the importance of making pledges and commitments to action.

Guy Bigwood, Chief Changemaker of Iceberg partner the Global Destination Sustainability Movement, pointed out that sustainability does not mean “sustaining” the status quo now causing climate change. What is needed, he suggested, was a “regenerative revolution”, referencing the title of a white paper he authored for IMEX.

Hence the GDS-Index, whose annual rankings were announced during the 60th ICCA Congress. Events, Bigwood thought, can catalyse change. But meeting design itself hasn’t changed enough in the wake of COVID. Delegates simply shouldn’t be flying to attend meetings with no clearly defined legacy strategy, and all parts of the supply chain need to engage to make change happen. Associations can be too slow to adapt. Corporates have been moving faster.

COP26, Bigwood said, would be a “big COP”. “It’s exciting to the see that the events industry is turning up, is on the table, versus being on the menu, because we are at risk. We are in a majorly fragile position right now.”. “Pledges are good, but they’re short-lived. So the roadmap is clear”, he said. “It means that we can’t fly as much as we have done before, in the short-term. It means we really have to catalyse change.”.

Also discussed: the role of plastic and food waste alongside travel, how Bigwood designed UNFCCC’s methodology for measuring carbon impact at its own events, and the GDS-Academy partnership with ICCA and Iceberg partner European Cities Marketing. “If your whole business model is based on flying people long-haul around the world… that has to change”, he said. “That’s hard.”. Bigwood also agreed with Kai Hattendorf’s point about the industry bringing delegates together to centralised gatherings actually lowering the larger impact that travel to many individual meetings would create. Plan time on site to meet as many people as possible, Bigwood suggested, and in the process make your budgeted travel allowance really count.

A “Watershed Moment” for Events – and the World (PCMA article)

Long Read: The Time for Talking About Net Zero Is Over, It’s Time for Action (Exhibition News article)