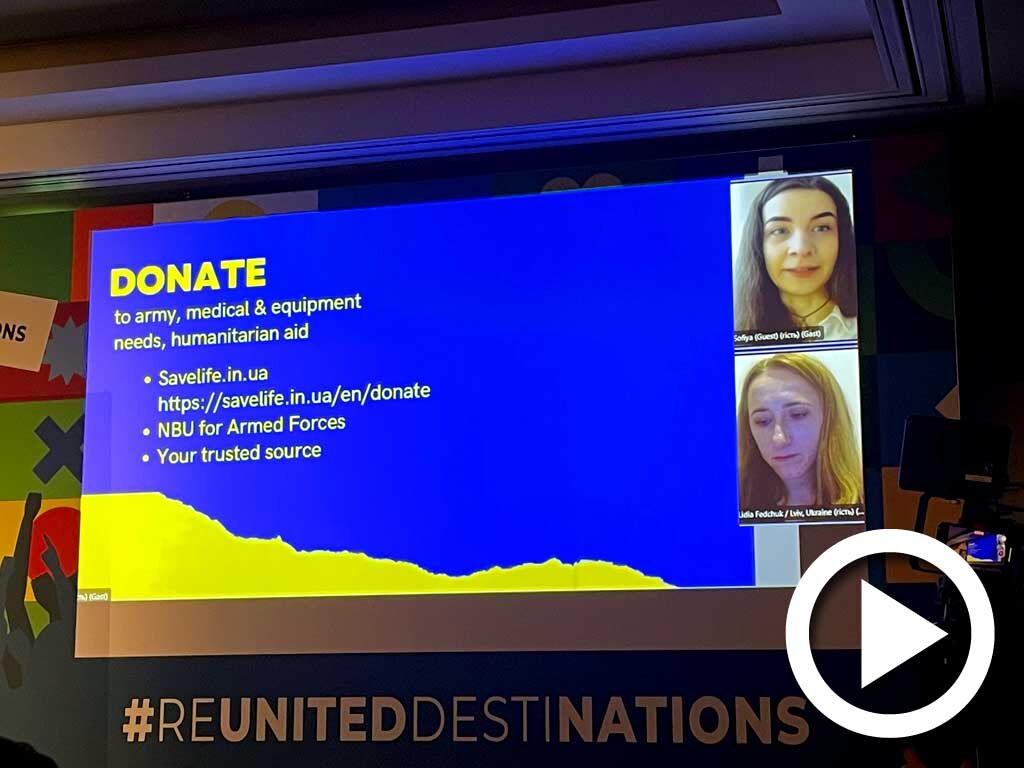 Iceberg partner European Cities Marketing has just staged its International Conference and General Assembly in Hamburg, rebranding during the event as the City Destinations Alliance. The meeting formulated policy on Russia’s invasion of Ukraine, also making a video of solidarity, and held a remarkable session hearing from two industry colleagues based in Lviv, Ukraine.

Russia’s invasion of Ukraine, even before the grim and growing evidence of war crimes began to emerge, has seen international associations with either Russian or Belarusian members or exhibitors, or holding meetings in Russia or Belarus, forced to take tough decisions about ending or suspending long-standing and profitable partnerships. For Iceberg partner European Cities Marketing, just recently rebranded as the City Destinations Alliance, standing with Ukraine began with two statements issued by President Petra Stušek. On March 2nd the first strongly condemned the attacks on Ukraine.

In a remarkable session during its International Conference and General Assembly in Hamburg, City Destinations Alliance delegates heard from two industry colleagues based in Ukraine, Head of the Lviv Tourist Information Centre Lidia Fedchuk and Acting Director of the Lviv Convention Bureau Sofiya Kayinska.

Kayinska wished she could be present in person at the Hamburg event, but instead explained “we are here fighting for our freedom and our country”. She reminded attendees of the longer-term historical background to the conflict and exactly how Russia’s recent invasion had progressed. She spoke of the outside world’s imposition of sanctions against Russia, and of its support for Ukraine including military equipment supply. “We are really happy that we have such good alliances, because as Petra said, it’s all about alliances. Yes, that means a lot!”.

Fedchuk gave a sense of how the local meetings industry had been repurposed to assist the local war effort. She talked of the Lviv Media Center, the Reporters Without Borders Press Freedom Center, and the Ukraine Media Centre. Local destination management personel, she explained, were helping 1,300 journalists from 50 countries, because they can speak English. Professional conference planners were organising refugee queuing and childcare facilities at railway stations, plus managing food distribution alongside World Central Kitchen. Indeed, international and local journalists, plus temporarily displaced people, Fedchuk said, are now Lviv’s new “tourists”.

It was extraordinary to hear such calm and measured testimony coming from within a country under attack, and to understand how the local meetings industry is playing its part with practical legacies.

A report from Lviv, Ukraine.

The session wrapped up with Fedchuk and Kayinska appealing for international help from the delegates. They called for their audience to lobby governments, to donate money, to spread truth, to boycott both Russia and Belarus, and to support Ukraine. They also offered a new iceberg metaphor to describe the impact they hope Ukraine will have upon Russia. This time the larger mass of ice lying hidden beneath the surface represents the unexpected strength of Ukrainian resistance.

“I’m really proud actually to be Ukrainian now, like never before I guess”, said Fedchuk. Kayinska followed up “We are trying to stay strong. We are waiting for you in Lviv in Ukraine after it’s over, after our win, so stay with Ukraine and thank you very much for inviting us!”. Choking, she concluded “Our fight is stronger than their bombs!”.

Appealing for delegates to stand by Ukraine.

During the conference in Hamburg, the City Destinations Alliance also produced a collective statement on the war. This was recorded by participants as a video.