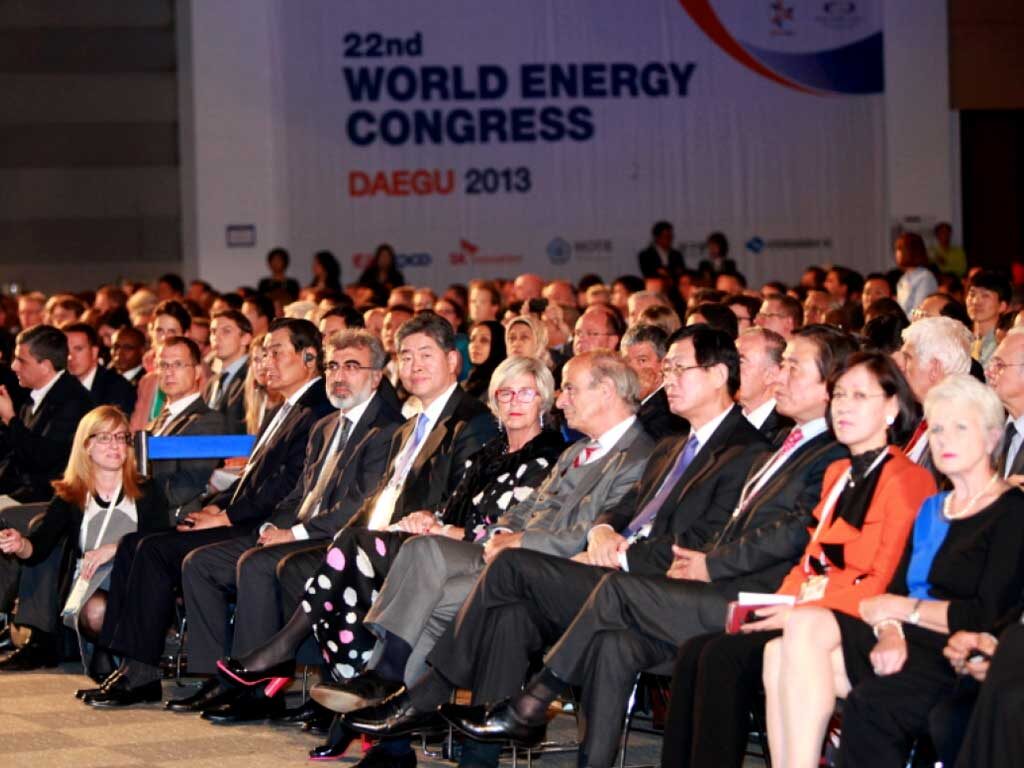 Daegu in South Korea hosted the 2013 World Energy Congress, often referred to as the “Energy Olympics”. The meeting built upon long-term city strategy in solar power and upon staging earlier events in the sector. It went on to create multiple legacies to shape Daegu’s future. By Jane Vong Holmes, Senior Manager Asia, GainingEdge.

Two decades ago, in 2000, Daegu embraced a forward-looking 50-year project called “The Solar City Daegu 2050 Project’. This SCD 2050 called for the citizens of Daegu to envision a future which is environmentally friendly and sustainable. Long before “net zero” became a buzzword, Daegu has already made significant strides of its own in the field of renewable and green energy technology.

As part of its action plan to reach out for these transformative goals, in 2003 Daegu joined the International Solar Cities Initiative and, one year later in 2004, hosted the inaugural International Solar Cities Congress. This was a significant direction as the pillars of South Korea’s industries like steelmaking and petrochemicals have long hinged on coal and other carbon-intensive energies, and this signaled its departure from the traditional to a new and safe future.

In order to consolidate its position as a global renewable energy hub and to play a leadership role in the global energy transition from coal to carbon neutrality, Daegu made a bid to host the 2013 World Energy Congress (WEC 2013), often touted as the “Energy Olympics”.

Hosted every three years in cities all over the world, WEC is the largest meeting of energy Ministers, utility executives and engineering firms. Some 5,000 top decision-makers from all continents convene to do business, to share insights, to innovate, and to forge new inroads in energy transition. Daegu is only the second East Asian city, after Tokyo, to host the World Energy Congress.

WEC 2013 Daegu was hosted by the World Energy Council and WEC Korean members committee. The congress attracted some 7,546 delegates from 123 countries and 30,000 participants to its exhibition, making Daegu the global gateway for Korean companies in the energy field. The direct economic impact from hosting WEC 2013 was estimated at 500 billion South Korean Won ($400 million).

Beyond the convention’s immediate outcomes, how did WEC 2013 help Daegu to achieve its SCD2050 goals?

“Daegu raised its profile and gained a lot of recognition in the global energy community”, revealed Suzanna Samstag Oh, Vice-President, Korea.com, in the Business Events Legacies in Daegu, Korea report commissioned by the Daegu Metropolitan City and Daegu Convention and Visitors Bureau. “Daegu’s Solar City Initiative offered a roadmap for how other cities could advance without total reliance on conventional energy sources. WEC 2013 turned out to be a great success. At that time, Daegu hosted the largest number of delegates in the history of the World Energy Congress. This achievement show how much the profile of Daegu and Korea have been enhanced among the international energy community.”

Ms Im Gyeong-ran from the International Trade Division, of the Daegu Metropolitan City chipped in: “Now Daegu is so well known in the energy sector that if our industry people introduce themselves to the world energy market by saying ‘I’m from Daegu,’ everyone will recognise the city.”

With such recognition and credentials under its belt, it is therefore no surprise that Daegu was later selected to host the International Solar Energy Society – ISES Solar World Congress in 2015, and the 2019 SolarPACES Conference.

“When we successfully hosted WEC 2013 with over 7,000 attendees”, Ms Im continued, “it boosted the city’s confidence and became our starting point to bid for more large-scale events. As you know, we later hosted the World Water Forum in 2015 (14,800 pax), and we are set to host the World Gas Conference – another mega event – in May this year.”

In fact, EXCO or the Daegu Exhibition and Convention Center, buoyed by this confidence, undertook a second expansion programme so that the city will be able to cater for bigger business groups. With the opening of its East Wing, EXCO now offers an exhibition area of 15,000 square metres with one basement level and two ground levels. Combined with the original space, today EXCO can accommodate 30,000 square metres of exhibition space requirement.

Mr Charlie Bae, CEO of Daegu Convention Bureau provided further insights. “Hosting WEC 2013 helped our city establish strategies for the development of its renewable energy industry. Today, this sector is one of the city’s new growth engines. Daegu’s economic structure has changed. We are still an industrial powerhouse but now one which is more environmentally-friendly and high-tech. Today, Daegu is fully committed to becoming a clean energy, self-reliant city by expanding clean energy sources, including solar, fuel cell, and LNG, across the city. National energy companies and those from abroad have access to test beds at the National Industrial Complex and Daegu Technopolis as part of our efforts to promote new energy industries. Each year, Daegu hosts the International Green Energy Expo Korea which is in the top three of Asia’s and among the top ten largest renewable energy exhibitions in the world.”

“Along with such efforts, we also focus on strengthening the global competitiveness of our leading industries. Besides green energy, we consciously seek and bid for conventions in the water, future vehicles, robotics, and medical industries with legacy impacts at the core of our bid proposals and events delivery. When we bid, we offer legacy opportunities to fulfill the organizer’s vision and mission. When we win, we plan and design the convention in such a way to leverage on the drivers and catalysts for our economic sectors, while adding legacy value for the international association.”

Younghoon David Kim, Chairman and CEO of the Daesung Group – one of South Korea’s oldest energy conglomerates – was the Co-Chair of the Organising Committee for WEC 2013. Three years later in October 2016, he was elected Chair of the World Energy Council headquartered in London, and played this role for three years. Mr Kim also served on the Energy Council of Korea, advising the government on national energy policies and securing energy resources. His views on renewable energy, smart grids and future technologies were sought at a panel discussion at the World Gas Conference, held in Daegu from 23rd to 27th May 2022.

“Our Business Events Legacies in Daegu, Korea report has clearly illustrated that when planned with long-term legacy impacts in mind, Daegu will get more out of our conventions”, Mr Bae emphasized. “At the same time, we offer convention planners and organisers high quality and high value business events because our focus on legacy also creates more value for them and their participants.”