Politician, diplomat and educator Baroness Amos has given the keynote at a Sydney Speaker Series luncheon in London. The event was delivered in partnership between Business Events Sydney and ICC Sydney, and was hosted by the High Commission of Australia. The Iceberg itself was invited to attend, and was even able there to interview BESydney CEO Lyn Lewis-Smith.

There is no better antidote to a dull and rainy November day in London than to pop over to Australia for a spot of lunch.

On November 7th The Iceberg was once more the guest of Business Events Sydney (BESydney) and ICC Sydney at the annual Sydney Speaker Series Luncheon. The venue was again the historic Australia House on the Strand, decorated in palatial style with marble shipped all the way from Australia itself, and celebrating its centenary this very year.

The aforementioned lunch, introduced by culinary media personality Lyndey Milan, was spectacular: a herb-crusted rump of Australian lamb with vegetables and paired New South Wales wines. This was after incredible canapés including the welcome reappearance of last year’s star turn, a parmesan wafer with quail’s egg and truffle mayonnaise. I mentioned it in Business Events World issue 22, and I really should namecheck food I want to try again more often.

Australia House is home to Australia’s High Commission, and new High Commissioner George Brandis (pictured above) was on hand as host. Also present was Beverley Parker, Business Development Director at ICC Sydney (far left above), who hinted that the venue might be making further announcements about its legacy programme at the upcoming IBTM World in Barcelona.

At a parallel event in New York, Professor David Sinclair, geneticist and BESydney Global Ambassador, was the guest speaker. In London it was the accomplished Baroness Amos: politician, diplomat, former British High Commissioner to Australia, and former UN Under-Secretary-General for Humanitarian Affairs and Emergency Relief Coordinator (second left above).

Valerie Amos spoke about her time in Sydney, then on the subject of bridging global and local societies. The wide-ranging speech encompassed everything from pandemics to climate change, immigration and Brexit. Seventy years after the Universal Declaration of Human Rights, she wondered whether such an agreement would be negotiable in today’s fractured politics. Indeed, Amos’ analysis of the current moment was precise and searing. It is “a polarised and deeply contradictory time”. “We have more connectivity than ever before… …and yet… we’re actually talking to fewer and fewer people who aren’t like us”, she lamented.

While the role of business events wasn’t her main theme, the meetings industry leapt centre stage when Tania Baumann of the World Energy Council asked Amos about her criteria for ethical destination selection. “I think everybody’s grappling with this right now”, said Amos, “not just in relation to where you host events, but a whole range of other things…”.

Having earlier mentioned Google’s ethical dilemmas about entering the Chinese market, Amos described how the School of Oriental and African studies, of which she is Director, has just reviewed its relationship with Saudi Arabia “in light of recent events”. “I think a business has to ask itself ‘what are we about?’, ‘what are our values?’, ‘who do we want to be associated with?’, and I think there is something else, which is ‘are we trying to push the boundaries to try to transform and change something?’ – which by some would be seen as risk taking – or ‘are we going to play safe?'”, she reasoned.

Baroness Amos described the destination selection of a UN humanitarian conference, the choice having been between Geneva and Istanbul. Some event stakeholders felt that Turkey’s human rights record made it unsuitable. “But the decision was taken to have that conference in Istanbul, precisely to try to influence the Turkish government in various respects. They were a lot of people who challenged that decision. I was one of the people who pushed very hard for it. Geneva was very much the safe option. I can’t tell you that it was easy, but I think it was worth taking that decision to try to push the boundaries a bit”.

Amos also spoke in favour of events offering delegates real interaction with the destination and its communities. “So it shouldn’t just be the content of the event, it should also be that engagement”, she explained.

The Speaker Series event was also an opportunity to meet up with BESydney’s quiet force of nature CEO Lyn Lewis-Smith (pictured far right above). We talked about the recent major meeting hosted at ICC Sydney, SWIFT’s Sibos.

“For me the vision was about positioning Sydney as a financial services hub in the Asia-Pacific”, Lewis-Smith explained. “But the legacy is all about value capture for us. Our Treasurer hosted about 150 of the c-suite of the world banks, encouraging them to headquarter in Sydney. Our fintech sector was showcased to the world – and we’re at the forefront of online payment systems – so all our entrepreneurs have the opportunity to capitalise, scale up and export their products. Then importantly our university sector and our students got the opportunity to pitch to the global audience around data protection and privacy. So they’re at the forefront of solving one of the biggest issues in the world right now. They’re the legacies, yet to be measured”.

Also mentioned during the event was Western Sydney Parkland, the “third city” soon joining Sydney’s Harbour City around the central business district and River City around Parramatta. New neighbourhoods are under construction, along with a second airport for the New South Wales capital. “I think this will be a game changer for Australia and will open the floodgates again to Asia”, said Lewis-Smith. We’ve had significant growth but you can imagine a second international airport will open up more routes and more capacity, and that brings business opportunity with it”.

Above all Sydney is known as a city where stakeholders speak with one voice when it comes to attracting and serving the business events community. In her opening welcome, Lyn Lewis-Smith called global meetings “soft power assets”. I asked her what she meant by the phrase.

“When you host a global meeting”, she said, “you have the opportunity to really move behaviours, share ideas and get decisions out from a local and global perspective. A country has an opportunity to showcase education institutions, cultural and tourism assets, lifestyle and the like, and then that leads to soft power diplomacy, if you like. It leads to inward investment, trade and talent attraction. But importantly it leads to key social outcomes. You can actually drive key outcomes as a country by hosting global meetings”.

Robert Coren, Curator of The Iceberg 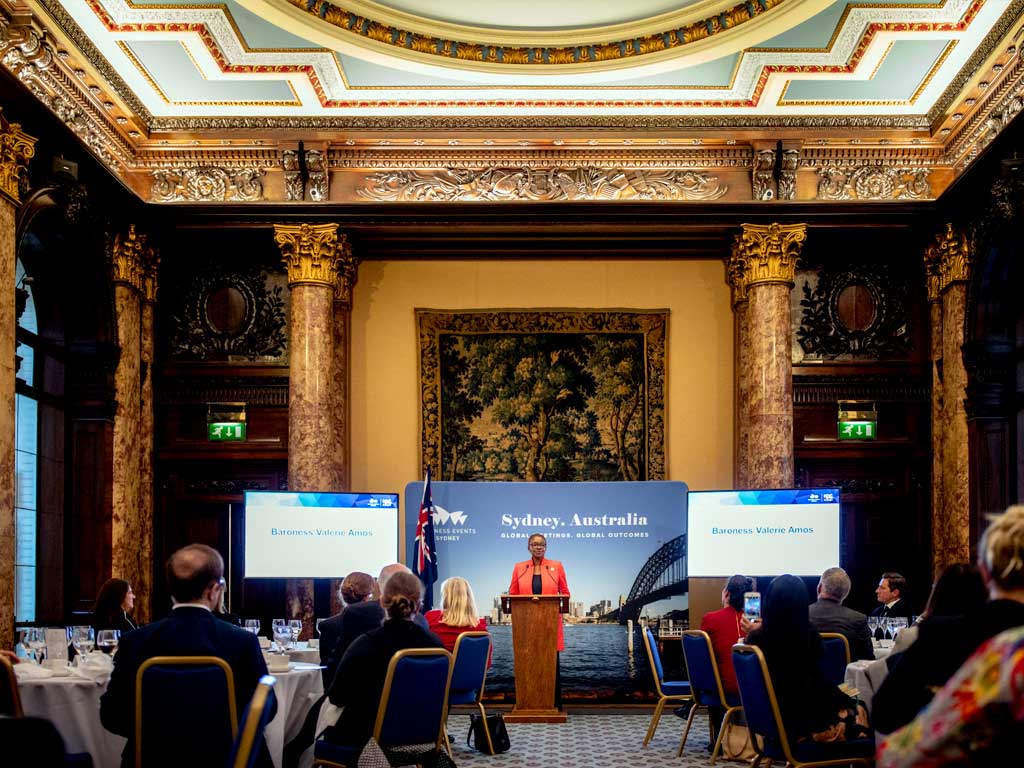