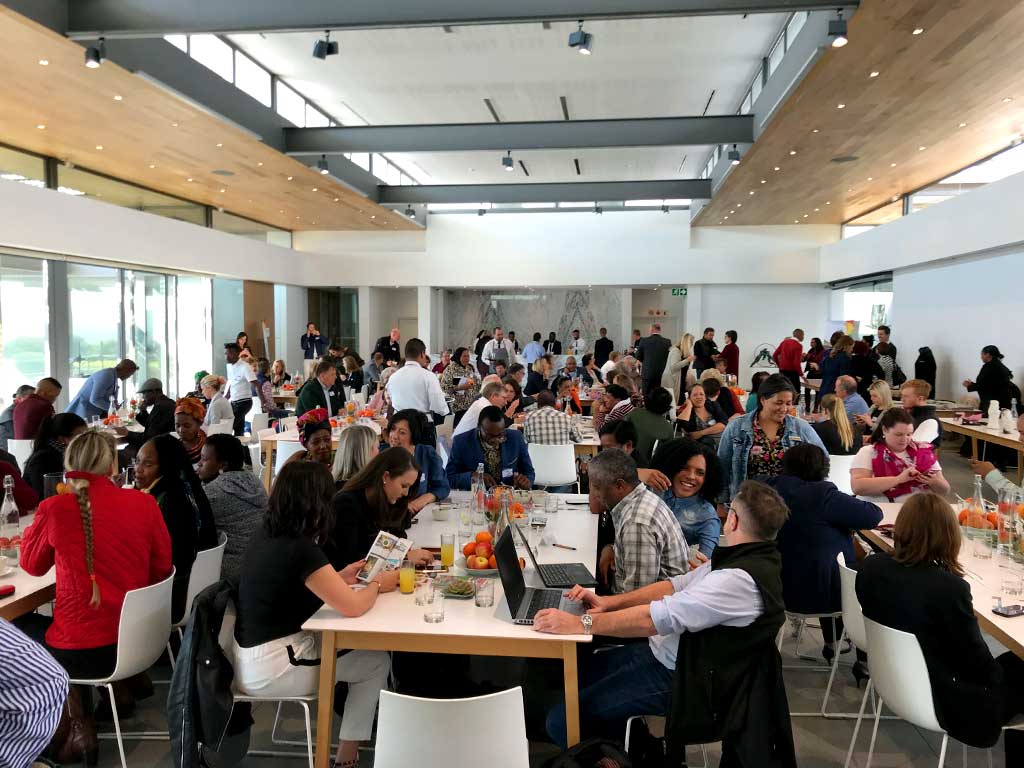 Stellenbosch 360 has just hosted its second Business Tourism Indaba, at which The Iceberg was invited to attend and speak.

As well as gathering meetings industry players from across South Africa and wider, the Indaba shone a spotlight on both the university town’s own sector offering as host, and the approach it takes to fostering and promoting homegrown intellectual capital.

Stellenosch 360’s own offices are alongside the Stellenbosch Village Museum.

Stellenbosch – also called “The City of Oaks” – was founded in 1679 by the Cape Colony governor Simon van der Stel. Its dramatic history as the second oldest European settlement in the province, reshaped by both fire and flood, is very much still all around and easily accessible to explore.

The museum comprises four historical houses and their gardens.

Today the Stellenbosch Valley is part of the Cape Winelands, the larger of two main producing regions in South Africa. It’s therefore blessed with an abundance of vineyard estate venues boasting incredible views, like those of the House of J. C. Le Roux.

The view from the House of J. C. Le Roux, Stellenbosch.

A tasting of J. C.’s signature sparkling wine was a particular highlight of the advance hospitality Stellenbosch 360 offered The Iceberg. When there are five glasses per person, each housing something different – and not a spittoon in sight – you just know it’s going to be a good afternoon.

Also before the Indaba – albeit after the sparkling wine! – I got to see how the town nurtures its intellectual capital.

Stellenbosch University is home to a student population of 29,000 and is the second-highest rated African University according to 2017-2018 QS World University Rankings. Innovus is SU’s commercial platform, patenting and licensing intellectual property and forming spin-out companies. LaunchLab, right at the centre of the university campus, is Innovus’ business accelerator, helping out fledgling entrepreneurs with affordable rents, networking opportunities and mentoring.

The accelerator offer its services to spin-out companies formed in conjunction with Stellenbosch University, to independent student-owned enterprises, and also to external startups as well. Behind the quiet, concentrated energy of its hot desk area, winding corridors house the resident companies themselves in small offices.

How innovation is processed at LaunchLab.

The contribution Stellenbosch University and Innovus are together making to the town’s future was also showcased at the Business Tourism Indaba, along with two of LaunchLab’s star startups. Custos is a patent-pending cryptocurrency technology which allows media owners to monitor copyright infringement and identify the culprits. The system is even being used by another LaunchLab business after a chance encounter at the coffee station.

Custos and Mellowcabs joined Innovus on stage at the Business Tourism Indaba.

The other LaunchLab star’s product was itself also on show at the Indaba. Mellowcabs is in the business of “on-demand last-mile transportation”. That means not just manufacturing and leasing its banana-like electric vehicles, but also creating an app to let users hail a ride, and seriously exploiting as well the vehicle’s advertising potential. The model has major international interest, and Mellowcabs has been listed as one of Africa’s seven most innovative companies by Forbes magazine. 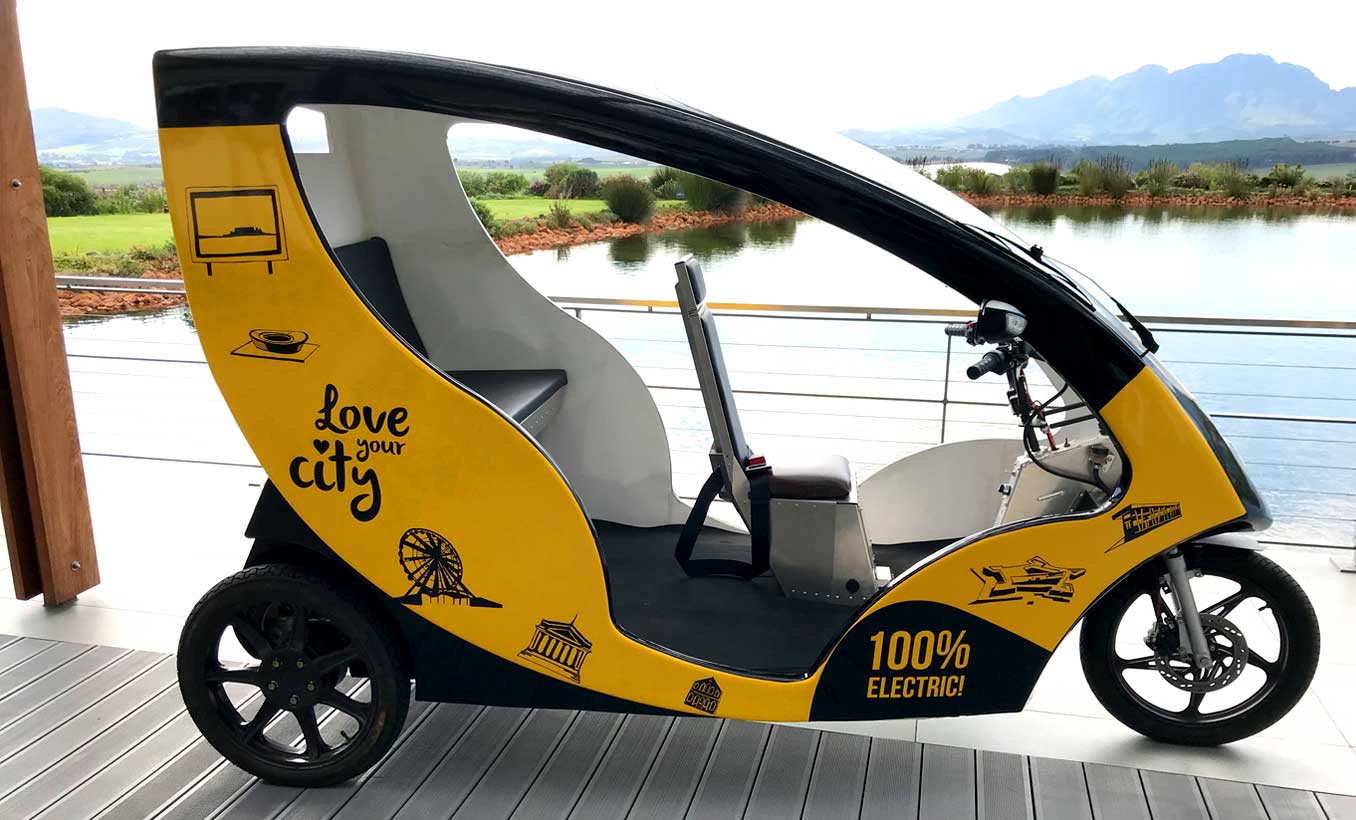 The rest of the Business Tourism Indaba saw the meeting industry’s regional issues get a thorough airing. South African Tourism Minister Derek Hanekom gave the opening address, with a welcome also from Shadow Minister James Vos, who is Stellenbosch’s own Member of Parliament. South African Tourism CEO Sisa Ntshona chaired a debate on the sector’s future, and Tim Harris, CEO of the tourism agency for Cape Town and the Western Cape Wesgro. described economic disruption as “the new normal”.

In a charming touch, key speakers – including myself – were presented with a unique and original statue as a thank you present. Artist and sculptor Jacques Buys, together with his son Lee, runs a foundry business right next to Stellenbosch 360’s offices and the Stellenbosch Village Museum.

To earn my own Buys original, I also took the podium for The Iceberg to discuss “the congress industry’s business development dividend” (by which of course I meant wider economic growth and building knowledge economies, not just “business”). I discussed our signature iceberg metaphor, and the importance of understanding the broader and more massive legacies of business and professional events that lie hidden below the surface, directly underneath the smaller, visible tip of visitor economy spending.

The Iceberg curator in both statue acceptance and drum banging modes.

Worthier highlights included the hilarious Dr Morné Mostert, Director of the Institute for Futures Research at Stellenbosch University, on the coming impact of artificial intelligence. There was some broader business motivational rock and roll from New Zealand Speaker of the Year Michael Handcock. And I particularly enjoyed a debate on transformation in business tourism moderated by South African Tourism’s Chief Convention Bureau Officer Amanda Kotze-Nhlapo. She’s already a friend of the Iceberg team, and thinks about the sector in a way very similar to us.

The daytime view from the Cavalli Estate venue.

The Cavalli Wine Estate – a venue more typically used for wedding hires – provided a stunning backdrop to the meeting. Zelda Coetzee-Burger was an adept and seamless mistress of ceremonies on day two, and the opening day was hosted with huge enthusiasm by the event’s driving force, Stellenbosch 360 CEO Annemarie Ferns.

Above all the Business Tourism Indaba demonstrated that Stellenbosch, the Western Cape, South Africa as a whole – and the wider continent with it – are all finding their own answers to that tricky conundrum of whether business events are really part of “tourism” at all, or something all of their own. And the town, region, country and continent showed very clearly that they’re separately – and together – committed to hosting incredible meetings, and to furthering their own economic development through the legacies those meetings leave behind.

A classic nighttime view of Cape Town from the venue.

Intellectual Capitals, Stellenbosch 360 and South African Tourism all contributed to bringing The Iceberg to the 2018 Stellenbosch Business Tourism Indaba.